In this edition of The Pep Episodes: Beating Dortmund but beaten by emotions – Pep Guardiola’s last match as a Bayern coach ends in a cup victory and tears.

The final game, the final whistle, it was a relief. Pep Guardiola couldn’t hold it back anymore, while his players celebrated on the pitch, bursting out in pure joy, he bursted out crying. He tried to hide his tears and his face with his hands, but everybody could see his emotions. Guardiola barely stopped crying for minutes, he was simply overwhelmed.

After Douglas Costa converted Bayern’s last penalty in the cup final against Borussia Dortmund to seal the double, the world, at least the small Bundesliga world, saw a different Pep Guardiola. Guardiola is human after all, the last pictures of him on German football soil are the most emotional ones of him. Finally.

The German media reacted surprised the day after the big final, Guardiola’s last game in charge of Bayern. “Look, he’s human”, ran the headline of Die Zeit, and almost every other outlet was writing and noticing the same. “He is human after all” was the consensus, like Guardiola has been something different the whole three years he worked in Germany. Many praised his obsessiveness and ambition to get the best out of Bayern, to implement his ideas into the proud Bavarian club in his sophisticated, manic fashion. “But football is more than analysis and strategy”, noted kicker sports magazine, not always Guardiola’s biggest fan, “it requires empathy and emotion as well. Guardiola showed these human movements very late.”

“With tears [going] through the big door”, the headline of Frankfurter Allgemeine Zeitung ran, calling the cup win a “dramatical, liberating victory”. A much needed victory, an emotional victory for the manager and the human being Pep Guardiola. During his last months in Germany, the talk – especially after the third elimination in the semi-final of the Champions League in a row – was about him not fulfilling his mission, about failing, about being incomplete.

Others said Guardiola should not be measured only by his titles, but by his style-defining football, by the way Bayern plays, the way Guardiola set the club up for the future. But something was missing until the last day. A big night. A glamorous, emotional triumph. The championships weren’t enough, simply because it was to easy for Bayern, they won them to early three times in a row, without some suspense or drama. Unshackling drama Guardiola needed, like in the cup final against BVB. Drama and emotions, it was all there, on the pitch and in Guardiola’s heart, when he started crying and everybody saw it. He was relieved – maybe because it’s finally all over too?

“Maybe one will appreciate him when he’s gone”, said Thomas Tuchel, Dortmund’s smart coach, a friend of Guardiola who surely appreciates him and his work a lot. And after Guardiola’s tears have dried, the Catalan spoke himself: “The last five months haven’t been easy”, the Catalan admitted, “what people said about me was different after my decision.” He meant his decision to leave Bayern, after announcing he’ll coach Manchester City next, he felt the media criticised, attacked him even more than usual. We won’t find out why he cried, out of joy or because of all the emotional and psychological pressure?

The crying Guardiola is not the only symbol left of him, but the most powerful one. There are other two vigorous pictures as well: The one he floats in the air after his players threw him up to celebrate him, a picture very well know from his days at Barcelona. And the one he lifts the cup. Philipp Lahm, Bayern’s captain, handed the trophy over to Guardiola to pay his lasts respects, to set an example: ‘That’s for you, boss. You earned the honour to lift the cup as the first one.’ 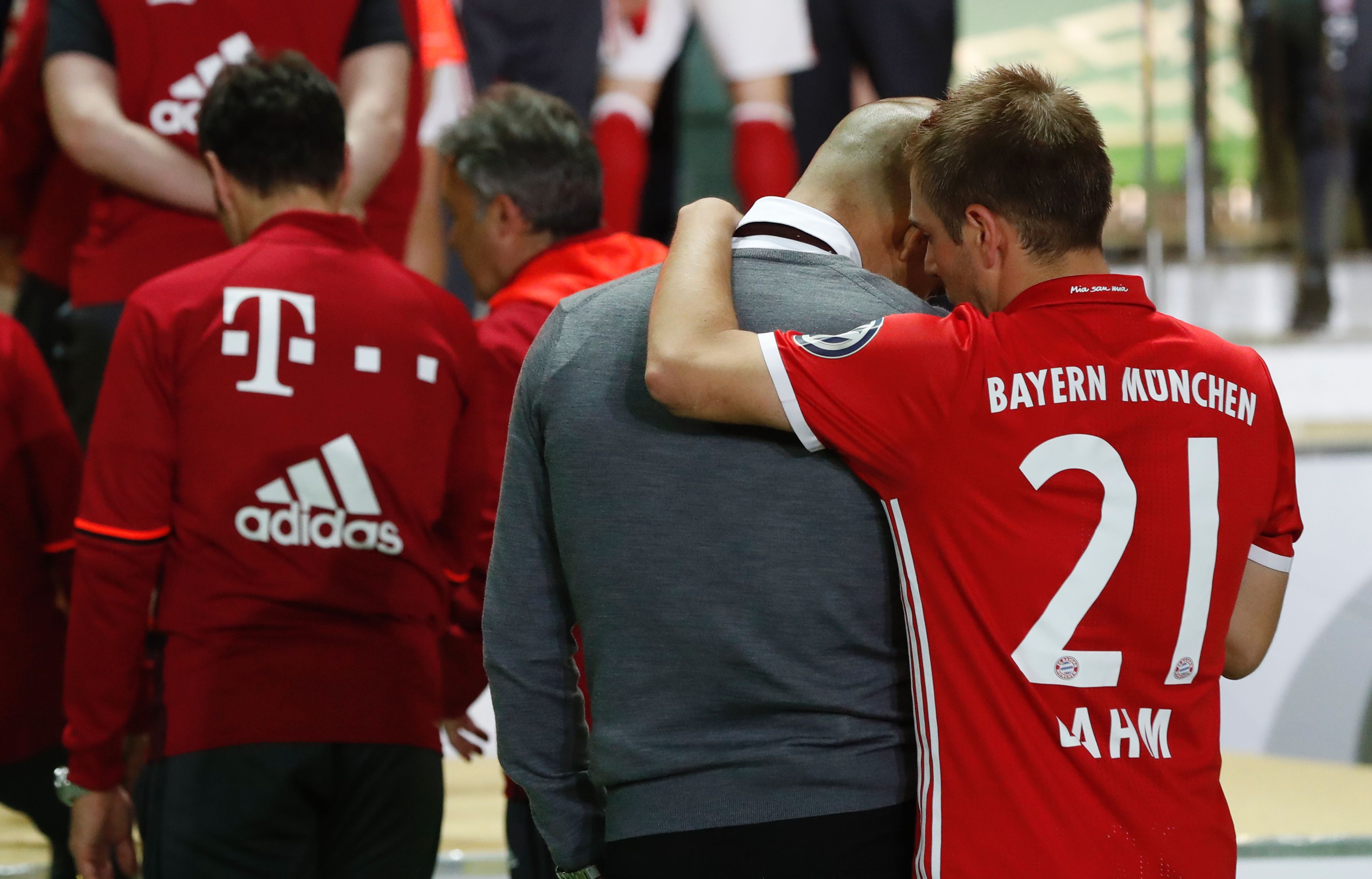 When players do that, it says a lot about their relationship to their manager. A (reliable) relationship the media never had to Guardiola. Because he didn’t want to, and because some journalists have been upset. Guardiola made some mistakes, not being upfront was maybe the biggest one; the last one, when it probably didn’t matter anymore, was to publicly say “titles are only numbers”. Hence they don’t matter to him, he doesn’t care that much about them. Well, the club cares a lot, the fans too. Winning is very important at Bayern Munich, a very proud and sometimes even arrogant club, being the number one in all competitions is what they care about, not so much how they achieve that. Now, after three years of exceptional football and being by far the superior team in the Bundesliga, they might care a little more about how they win tho. Thanks to Guardiola. But still, titles will never be boring numbers, it’s Bayern’s main incentive.

Was Guardiola misunderstood after all? Probably never before a manager was so much under pressure and observation. Whatever he said or didn’t say, whatever he did or didn’t do, it got noted and interpreted. “It has to be an enormous burden to be that big of a projection surface for hopes and dreams and for incomprehension and frustration, when all you want to do is just one thing: To think, ponder and talk only about football”, summarized Der Spiegel quite perfectly. Guardiola doesn’t like all the fuss, all the pressers and interviews and questions about why he left out Müller or why his trousers split open. He wants to be left alone, he wants to focus on football and to work with his team to make it better and better.

So what will remain of Guardiola? It was the question every sports broadcast or outlet asked their spectators and pundits in the last couple of weeks. Well, all of the above will remain. Guardiola as a very complex person. “In the end, he could calm down his fierce critics a little bit – all he had to do was cry”, said Der Spiegel.
The humanization of Pep Guardiola, it happened in his very last game as a coach of Bayern Munich.