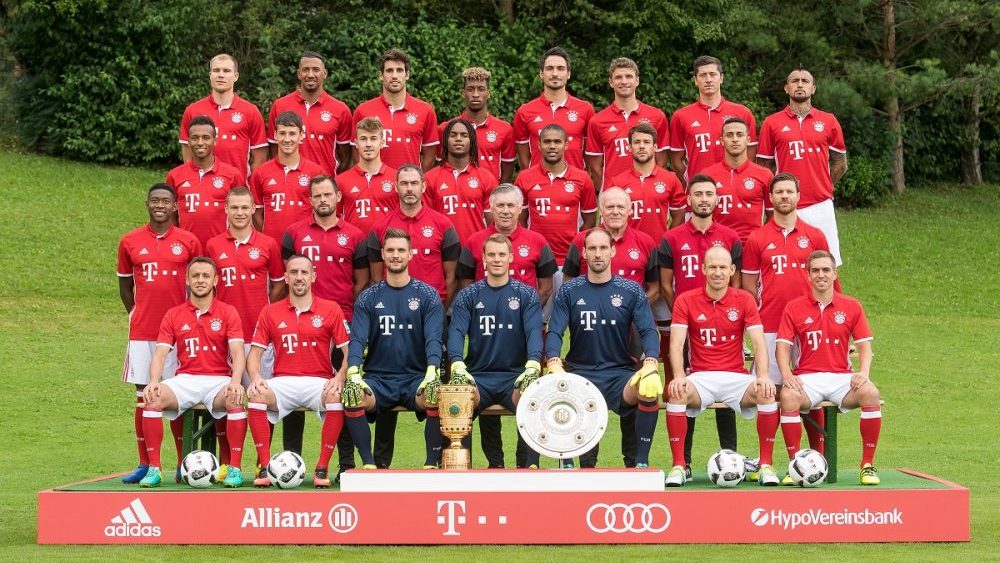 How well set-up is the Bayern squad?

Bayern Munich announced their squad for the 2016/17 season. Although the transfer window is still open, possible additions are unlikely bases on current indications. Time to raise the question: How good is every position filled and where could be possible shortcomings during the season?

In the last years Bayern always started the season with 20 field players. If there won’t be an additional transfer, this could be seen as a good sign for Julian Green. The 21-year-old showed reasonable and even goo performances during the preseason and could become a valid alternative to Robert Lewandowski or Thomas Müller. For a backup solution not the worst idea. He would be exactly the finale player number 20 in the squad, not counting the goalkeepers. Additionaly Benko and Dorsch are part of the official squad, but they probably won’t collect many minutes. Green should have the best chances, if there won’t be other signings.

Bayern has done fairly well with their strategy to have 20 to 21 squad members and complementing these with youth players, only extreme situations caused difficulties. To avoid those in the future Bayern improved the quality of the team once more. While Sebastian Rode, Mario Götze and Medhi Benatia left the club, Sanches and Hummels were bought. This should allow more rotation, even in the big games. But is it enough to be prepared for the aforementioned extreme situations?

The reigning champion improved the defensive quality with signing Mats Hummels. Although Medhi Benatia and Serdar Tasci left the club, every position in the defense is more than sufficiently staffed. Even more so, since the Moroccan defender was very injury prone.

Hummels puts up average injury times. Since the 2010/11 season he was absent for 315 days and missed 57 games, on average 52,5 days and 9.5 games per season. What’s interesting is the amount of injuries in the seasons 2013/2014 (98 days/ 26 games) and 2014/15 (115 days/16 games). This regressed to the mean last season with 33 days of absence and 5 games missed – Bayern will be able to rely on him. More interesting will be the constellation with Holger Badstuber, Javi Martinez and maybe even Jerome Boateng. However, the Munich squad will be more than prepared for every scenario, even more so considering Kimmich and Alaba as alternatives for the central defence.

For the two full-back positions Bayern has enough options, too. Captain Philipp Lahm and David Alaba should be safe for the first team. With Rafinha, Bernat and Kimmich more than enough alternatives are available to give them enough rest in the Bundesliga. Since Rafinha is slowly getting older and Kimmich’s best position is in midfield, Bayern should find one or two new players for those positions in the next years. Especially the succession of Lahm hasn’t been resolved properly.

This is the part of the team with the most options for Carlo Ancelotti. Besides play-making options like Thiago or Xabi Alonso, the Italian coach can also rely on classic box-to-box players like Arturo Vidal and Renato Sanches. On top of that there is Joshua Kimmich, an intelligent CM, who recently said that is preferred position is in midfield.
That’s why we will have the most interesting fight for starter positions in midfield.

If Ancelotti decides to play 4-4-2 there are only two positions left for the mentioned players. 4-1-4-1 won’t be better though. Since this system only has one place for a striker, Thomas Müller will also be part of the raffle for the five midfield positions. A back three looks unlikely at the moment. Javi Martinez, David Alaba and Philipp Lahm are players how could also provide a potential benefit to midfield.

Carlo Ancelotti will have to take very important decisions, also for the team chemistry. The central midfield might already be overstaffed, offers a lot of quality and is prepared for every emergency.

The winger positions have been the most important part on the pitch for the Bayern squad in the last years. The focus on the wings does exist since the addition of Frank Ribéry and even more so since the arrival of Arjen Robben. Both players characterized an era which now slowly ends. Robben injured again. He won’t miss many weeks, but his injury gives doubt for a healthy season.

The alternatives for both have already been signed last summer. Douglas Costa and Kingsley Coman took over in good fashion for the most part, but several times showed that they don’t have the quality of “Robbery”, yet. Especially Costa’s performances got significantly worse towards the end of the season and showed great problems with implementing the playing philosophy. He often had games consisting of many chaotic and improvised moments mixed with few positive moments, which had the potential to decide the game

Kingsley Coman is in a different situation. The 20-year-old proved that he is a valuable addition to the Bayern squad and had a convincing first year. His biggest weaknesses are caused by his young age – the end product. Although he often times succeeds in 1v1 or even 1v2 situations, he misses to find the right solution in the box. He doesn’t score enough and his crosses also leave room for improvement. On the other side he rarely makes the wrong decision, has a convincing game intelligence and plays with a lot of confidence. The public announcement of a regular signing of the Coman, loaned from Juventus, shows that the young French is on the right track.

Nevertheless, it will be key to have a healthy “Robbery” in the deciding weeks in 2017. How much could a fit Robben have helped Bayern in last year’s semi-final in the Champions League? The Dutch winger makes the right thing in the box with impressive consistency and can spark the whole offense with his play. In the loss against Mainz 05 he was the one to carry the whole team. He changed the course of the game and even scored the equalizer. External factors like bad luck with shots and unlucky situations where the reason for a loss in the end. Arjen Robben is and will be the go-to-go guy for the important matches and will greatly increase Bayern’s chances for winning the title when he is healthy in the deciding games of this year’s champions league.

The same can be said about Frank Ribéry, who experiences a second spring under Ancelotti. He is no easy player, but his quality still helps Bayern a lot. If he can continue his performances of the preseason, he can become a key player once again. It will be very important to manage his minutes due to his age. How many games in a row will he be able to play? Will he stay healthy? Will he be able to get the needed breaks? Those and more questions will decide if, indeed, he will have another spring or not.

The question whether Bayern is sufficiently staffed at the wingers’ position can’t be answered completely. On paper yes. But if any other winger besides Robben and Ribery gets injured the squad might be to narrow – identical to the situation in the final weeks for 2015, when only Kingsley Coman was able to play. That is why Ancelotti tested Juan Bernat, David Alaba and Philipp Lahm during the US trip on those positions. However, the experiment showed that with the lack of 1v1 quality not enough offensive power can be created. If Bayern were to sign an additional player, a healthy squad would be too big on this position. Bayern is in a transition period. As long as Robben and Ribéry are part of the team, luck in regard to injuries will be needed.

The two headed monster without alternatives

Bayern has Thomas Müller and Robert Lewandowski, period. Both have played on an extremely high level in the last seasons and are rarely injured. The Pole is probably the fittest and healthiest player on the team and Thomas Müller doesn’t have enough muscles to cause him any troubles.

But the question remains what Bayern will do if one of both gets injured. At the moment Julian Green is in the pole position for the backup role – while doubts about his quality remain. The upfront position might be the part of the team worst prepared for an extreme scenario. Mario Götze left and Pizarro, the best possible solution behind Lewandowski, left one season ago to Bremen. If Bayern decided not to add another striker, Bayern fans only can hope that they will remain injury free. Lots of rotations is not to be expected.

All in all there are only small areas of concern in the squad. The main issue will be the combination of managing the workload and the injury situation, again.The central midfield is exquisitely staffed. Ancelotti does not only have lots of high class players, but can always react to different opponents.

Bayern once more did an excellent job putting together their team for the 2016/17 season. The squad is well-balanced, offers a lot of alternatives and is ready for the future. If the injuries go back to a normal level the chances for the title in every competition are again really high.