Tuesday night Bayern faced the first of two hurdles on the way to the semi-finals in the Champions League. The Portuguese record champion SL Benfica came to the Allianz Arena and wanted to put up a fight against the favorite in Munich.

While Bayern were unable to truly convince against Eintracht Frankfurt at the weekend, Benfica won his final rehearsal against Braga impressively with 5:1. Thus Bayern needed their best possible constitution, to bring themselves in a good position for the return leg. 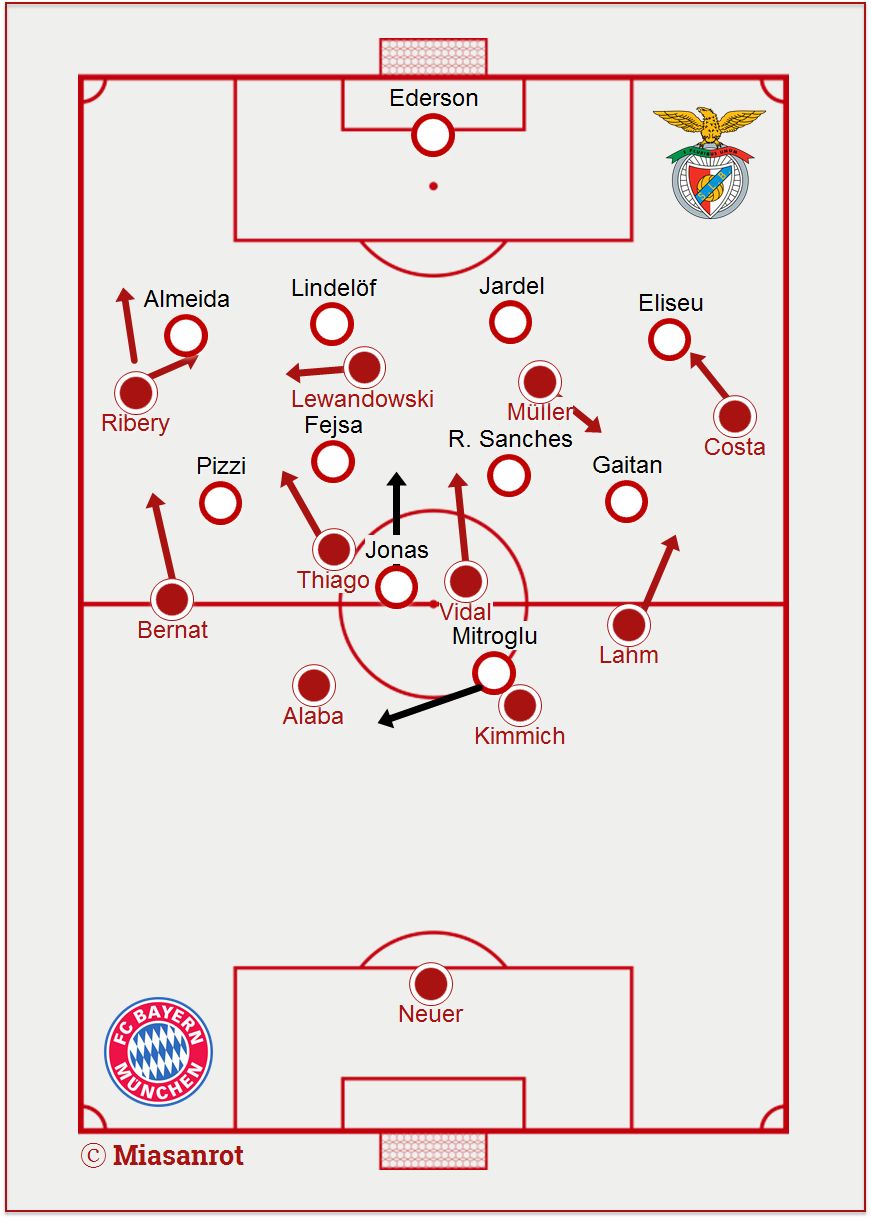 Vidal was able to convince again and reminded the fans of an old acquaintance. At his peak Bastian Schweinsteiger was known for repeatedly overloading the offensive center, for advancing in pressing situations at times and to open up the pitch with clever switches from one side to the other. Arturo Vidal united all these skills this evening, thus showing again an outstanding performance. Against the ball he prevented numerous counterattacks with his fore-checking and with the ball he organized the game of the record champion. The Chilean covered every blade of grass and already had 43 ball contacts at halftime. He even found his goal scoring abilities again, which he sometimes lacked in the past. Two dangerous headers in the first half and another shot in the second half earned him a goal.

In the second half he continued his performance. 91 ball contacts, a passing accuracy of 90% with 73 played passes, a key pass and three shots on goal demonstrate his excellent performance with the ball. Against the ball, he won the important tackles, blocked a dangerous shot just before the break and underlined his defensive presence with four clearances. Overall it was a pleasing performance, which will probably put him ahead of Alonso in the near future. Especially with his high, tactically clever positioning on the field, he recently became increasingly important.

Philipp Lahm also showed a very good performance. Defensively he controlled his opponent despite also playing a demanding role offensively. Against the ball the captain moved to his right-back position, where he could win incredible 83% of his tackles. With the ball, he moved into the center to support Arturo Vidal in the build-up game and covered the Chilean’s attacking runs. This process sometimes harmonized very well and led to some solutions that brought Bayern into the final third. The 32-year-old had 100 ball contacts and was a key playmaker against the very high attacking Portuguese. 75 of his 82 passes found a teammate, a 91% passing accuracy. He also had one key pass and nearly scored the 2:0 himself, if Lewandowski would not have played the short pass in the penalty area too long.

All in all the captain again proved that he can continue to go ahead in the big games. His importance to the defensive stability was enormous in this game. How challenging it is to keep the balance as a full-back in the system of Pep Guardiola showed a weak Bernat on the other side. The Spaniard won only 40% of his tackles and had to commit three fouls. Lahm always had a very good positioning, with which he also prevented some counterattacks, and simply made no mistakes. Moreover, with Nicolas Gaitan he had a very strong opponent, that only managed to have one shot and one key pass to his name at the end of the game.

Offensively Bayern showed too little. Although they could keep Benfica away from their own goal in all but two situations, Bayern didn’t find enough solutions against the high pressing line of the Portuguese. Bayern had many simple turnovers throughout the game. Ribéry (4 turnovers), Costa (3), Bernat (2) and Thiago (2) often lost control of the ball, because they acted too casual. Especially in the final third Bayern had unusually many wrong decisions. Here especially Robert Lewandowski has to be named, not only because of his poor pass to Philipp Lahm. The Pole often had difficulties controlling the ball and only had two shots on goal.

Costa and Ribéry were also always trying to create something, but too often with no end result. The Frenchman at least had five shots, but was only able to bring 3 of his 12 crosses to a teammate. Unusually often Ribery, but also Thomas Müller, made the wrong decision in front of the goal and thus ruined the chance of an early decision. Thiago joined in and became increasingly imprecise during the game. Instead of playing a simple pass, he and Douglas Costa often acted too casual and thus created good counterattacking opportunities for Benfica. Bayern only rarely managed to create combinations in the half spaces or smart breakthroughs in the box without crosses. 16 shots, of which only six were on goal, were eventually too little. Additionally, there were many offside situations, where there would have been a second, better solution. Five times Bayern was called offside.

But one must also acknowledge that Benfica was the expected tough opponent. Rarely has a team in Munich defended so well as the Portuguese after the 20th minute. The team of Rui Vitoria pushed up very high and at first attacked a bit too chaotic. Bayern knew how to use this with good switches from one flank to the other and thus were able to take the early lead. Then Benfica found its order. The two four chains were very compact, but by no means low. The presence in the center made it difficult for Bayern, even for pressing resistant players like Thiago. Fejsa won 57% of his tackles and Sanches shone over long phases of the game with his robustness and overview. Especially in the second half, there were times in which the two of them were able to free themselves from the Bayern counter pressing. Ultimately, it was Manuel Neuer and a bit of luck that saved the German record champions. Benfica had ten shots, won half of the duels and should have certainly also have scored a goal.

Eventually, it was a courageous performance of the Portuguese, although the lack of consistency of Bayern in front of the goal was partly responsible for that as well. With the 1:0 win Bayern have a good starting position for the second leg, but they should be warned after the performance of their guests.